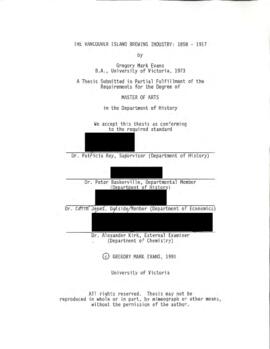 Paper and analog originals:
2 m of textual records and other materials

Greg Evans (1951-2018) was a British Columbia heritage professional and historian of beer and brewing in BC.

Evans was born on January 31, 1951 in Nanaimo BC to parents Vera and Frank Evans. The family moved shortly afterwards to Victoria, where Evans attended Oak Bay Senior Secondary School. He completed high school in 1969, then studied at the University of Victoria (UVic), graduating with a Bachelor of Arts degree in History in 1973. In Victoria, he began working in the heritage sector at the Maritime Museum of BC. For several years in the mid 1970s Evans moved to London (UK), working in public relations for the firm Radiomobile. Returning to Victoria, he joined the Royal British Columbia Museum (RBCM) in 1978. Evans met and married fellow historian Linda Eversole in the 1980s, and they had a daughter, Machala. Evans and Eversole separated in 2003. Evans later married Susan Woods in 2005.

In 1985, while continuing to work at RBCM, Evans entered the Master's program in History at UVic. His Master's thesis, The Vancouver Island Brewing Industry: 1858-1917, was completed in 1991. Following his MA, Evans continued to work in the heritage field. He left RBCM in 1992, moving over to Vancouver around 1994 to become Executive Director of the Vancouver Museum. He returned to Victoria in 2002 as Executive Director of the Maritime Museum of BC, and in 2011 he went on to serve as the Municipal Archivist of Esquimalt.

Post-thesis, Evans continue to actively pursue research on the history of beer and brewing, accumulating research materials and sharing his knowledge. He published articles and gave numerous public talks, presentations, and media interviews. He consulted on a number of history-themed projects for breweries and brewpubs, and he was historical interpretive consultant for the Arbutus Greenway Residential Project in Vancouver that redeveloped the old Vancouver Breweries site on Arbutus Street in 1999. In the early 2000s, Evans joined his wife Eversole in Legacy Heritage Consultants. Their projects included Brewer's Gold, a travelling exhibit created for the Chilliwack Museum and Archives that examined the history of the hops industry in BC and won the BC Museums Association's Award of Merit in 2005.

Evans was an active participant in the Victoria and British Columbia chapters of the Campaign for Real Ale Society (CAMRA), and he was an organizer of Victoria's Great Canadian Beer Festival in its early years (1993-1996). He promoted brewing history education, developing courses through UVic and UBC's continuing education programs. He delivered guest lectures and keynote addresses, conducted the annual Beer School classes during Victoria's Beer Week, and from 2006 created and led an annual Tall Sails and Ales Cruise with Maple Leaf Adventures, a six-day sailing tour of the Gulf Islands focussing on BC breweries and brewing history.

In 2011 Evans reached agreement with RBCM to produce a multi-volume book, The History of Beer Brewing in British Columbia, that would update his thesis and expand its focus to the entire province. He continued to work on the project until his death, but it was not completed. No manuscript (paper or digital) survives, though outlines and fragments can be found throughout his files.

Evans passed away on December 3, 2018. He was remembered for his humour, story-telling, vast knowledge of and passion for the history of beer and brewing. He was once asked, in an email exchange with fellow beer writer Joe Wiebe, what they should put as his job title for a piece he was preparing. "My title?" Evans replied, "Besides 'a fabulous guy' just say brewing historian if you like. I guess that's what I am."

Fonds consists of records made or received by Greg Evans in the course of activities, mainly relating to his research on the history of brewing in BC.

Activities documented include completion of his Master's thesis, his on-going post-thesis research and the unfinished book project; correspondence with brewers and other brewing historians; public speaking engagements and consulting projects; and Evans' involvement with CAMRA and the Great Canadian Beer Festival.

Records consist predominantly of Evans' correspondence, research notes and working papers; drafts and copies of his own writings, including his MA thesis; speaking notes and presentation slides; interview notes and transcriptions; reports, newspaper clippings, copies of articles, and excerpts from books and publications; and archival photographs and textual records, mostly copied from originals held at various archives, museums and libraries.

Fonds is arranged into ten series:

The records were transferred to the Archives in eight cartons, with little evidence of the original order in which Evans maintained his files. The arrangement into series was provided by archivist based on the activities which generated the records, and Evans' original file titles have been retained. There was a fair volume of loose, unfoldered material; these are indicated in file descriptions that include "loose papers" in the title.

The fonds includes copies of many documents and photographs held by other archives, musuems and libraries. Where these have been digitized by the Archives, the location and identifiers of the originals will be given in the file / item descriptions.

The Archives is committed to digitizing much of the material in the fonds and where possible to making it available online. To date (June 2022), only Evans' Master's thesis has been digitized (F-316-1-0-0-21). Materials will be added and descriptions updated as other materials are scanned.

Some digitized materials may not uploaded to SFU AtoM due to copyright restrictions. These, however, will be available for offline delivery, consult the reference archivist for more information.

The bulk of the files are open for access in the Archives reading room without restriction. A small number of files are marked "pending review"; these may contain third-party personal or financial information. Researchers can request access and an archivist will review the records more closely to determine their access status. Digitized records may be redacted for incidental personal information of third parties (e.g. thesis supervisor signatures; correspondents' phone numbers, addresses, email addresses).

The donors of the fonds (CAMRA Victoria) retained their own copyright but agreed to make their materials available under a Creative Commons Attribution-NonCommercial license (CC BY-NC). However, this applies to only a small segment of the records (see e.g. series 7). The remaining records fall into three broad groups.

(i) Materials authored by Evans. SFU does not own copyright in this material; copyright most likely remains with the estate of his (now deceased) second wife, Susan Woods.

(ii) Materials authored by third parties. Some of this material will be in public domain, but much remains protected, with copyright owned by their original creators.

(iii) Copies of historical documentation (photos, textual records) held by other archives, libraries and museums. Evans requested and received copies, subject to terms and conditions of use. These agreements typically set out limits on his ability to make or distribute additional copies without the repository's permission (Evans' permissions correspondence is located in series 9).

For copyright-protected materials not owned by the donor (CAMRA Victoria), the Archives makes copies available for private study or research purposes under the fair dealing provisions of Canada's Copyright Act. Use for any other purpose may require the permission of the copyright owner. SFU Archives can assist researchers in attempting to identify copyright owners, but it is the users' responsibility to contact owners and secure any required permissions.

As SFU Archives digitizes materials, it will attempt to identify those that are in public domain, as well as to identify and seek permissions from repositories with whom Evans had terms of use agreements.

Photographs - the fonds includes ca. 200 photographs. These are distributed across virtually all series. Evans obtained copies of historical photographs from various archives, museums and libraries. He also acquired some original historical photographs and he took his own photos (e.g. of bottles or of photos held by interiewees). Many prints were interfiled by Evans with related textual records in subject or project files; photos that were stored loose or in separate binders or folders have been brought together in series 9. Evans also digitized many of the prints and incorporated the images into the presentation slides in series 5.

Digital materials - the fonds included 5 thumb drives. This material consisted of presentation slides (ppt and pptx), scanned images Evans created of photographs and graphics (mostly jpg), and some word processing documents (doc, docx). Images and slides that were organized into folders for presentations have been integrated into series 5. The remaining images were placed by the archivist in series 9.

Most of the digitized images were low-resolution. They have been retained, but are presented in thumbnail "contact sheet" form. Where the initial prints survived in the fonds, they will be re-digitized by the Archives at a higher resolutions; where no analog version survived, Evans' own low-res scans are available. Consult the reference archivist for access.