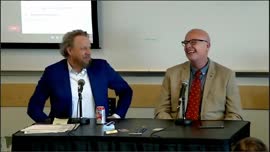 TechBC: The Geek is Still Chic

Panel discussion on the legacy of TechBC and how it laid the foundation for SFU in Surrey, held at SFU Surrey on May 19, 2022.

The Technical University of British Columbia (TechBC), a start-up university located in what was then Surrey Place Mall, began offering classes in 1999. At the time, some described it as the ‘MIT of the North,’ due to its use of technology in teaching and learning. The BC Liberal government closed TechBC in 2002 and its programs and staff were transferred to SFU.

On the occasion of SFU Surrey’s 20th anniversary, former members of the TechBC community reflect on TechBC’s achievements and legacy, and discuss the impact it had on SFU and on their own careers.

Note that the processing of series 4 (Legal action records) is still in progress, and the description is not yet published.

The series has been arranged by the archivist into eight sub-series based on the publication type:

They call us ugly to sell us shit