The fonds has been arranged into five series based on media type and subject:

Part of School for the Contemporary Arts fonds

Part of Office of the Vice-President, Academic and Provost fonds

Part of Office of the Vice-President, Academic and Provost fonds 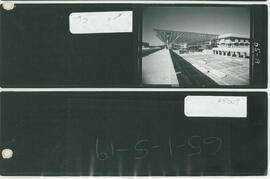 Series consists of photographs created by the staff photographers of LIDC and its predecessors. Negatives and contact sheets were systematically maintained, organized by year-based serial numbers (see sub-series 4 for description of the system). Two groups of subject-based files were also maintained, organized alphabetically: a set of slides (sub-series 2) and a set of unnumbered prints and negatives (sub-series 5. Subjects include SFU's architectural competition and design, interior and exterior architecture; opening ceremonies, presidential installations, Convocation and other special events; faculty portraits and images of students, faculty and staff in classroom and campus settings. Photographers whose works are represented in the series include Chris Hildred, Ron Long, Eddy Chan, Greg Ehlers, and Fred Kyba. Record types include negatives, contact sheets, slides and prints.

The series is arranged into three sub-series; note that there is no sub-series 1 or 3 (retired; see note on Arrangement).

Note that the 1963 negatives pre-date the construction of the university and were later incorporated by IMC into its photo system. There are no contact sheets for the 1963 images.

Sub-series consists of one documentary produced by LIDC, From C to C: Chinese Canadian Stories of Migration. The sub-series was established in 2018 to accommodate the transfer of this production, with anticipation of future transfers of similar material. The sub-series, however, is now closed.

Series consists of reports and publications produced by LIDC and its predecessors to communicate the department's activities and programs. Record types include annual reports, newsletters, brochures, and posters. Includes materials created by the former Centre for University Teaching.

Series of film and video works produced by staff of LIDC and its predecessors. It includes animated films produced in support of university teaching and research (sub-series 1); a documentary, From C to C: Canadian Chinese Stories of Migration (sub-series 2); and digital video footage of campus events and activities (sub-series 3).

The following text is from a December 2, 2010 press release:

Sub-series consists of photographic prints and negatives that were not assigned standard control numbers by the creating department (see sub-series 1-4 for description of the numbering system used by LIDC and its predecessors). Subjects include SFU architecture, campus scenes, and photos of university community members (Pauline Jewett, Chris Davies, David Skulski, A.J. Grants, Paul Cote, Wolfgang Youngrau, James B. Griffin, and R.W. Wylie). File 1 contains a series of photographs from the life of SFU Chancellor Gordon Shrum, including a World War I portrait and photos of his years at UBC and BC Hydro; some of these images were used in the the film produced by the Audio-Visual Centre This is SFU (1972).

Sub-series consists of slides created by LIDC photographers, maintained in alphabetically organized files based on subject. The exact relationship between the slides and the negatives and contact sheets in sub-series 4 is not clear; slides may have been created from the original negatives, but (with very few exceptions) there is no cross-reference on the slide back to a negative. For the general range of subjects, see parent series description (F-18-1).

Teaching at SFU Update: Newsletter of the Centre for University Teaching