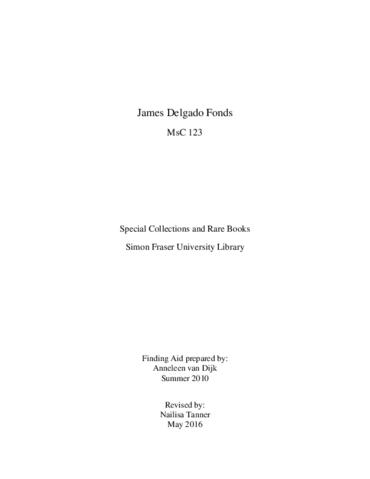 James Preston (Jim) Delgado was born on January 11, 1958 in San Jose, California, USA. He showed an early interest in history and archaeology and, at age fourteen, joined his first dig after noticing human remains at a construction site. The graduate students from an archaeology class from San Jose State took Delgado under their wing as they worked on the project. Most of the finds were turned over to the university except the human remains Delgado had found, which were repatriated to their descendants and reburied. Delgado met with the mayor of San Jose to voice his concerns regarding the desecration of the past, and was appointed to the City of San Jose Historic Landmarks Commission. Throughout high school he joined local archaeologists in exploring sites, and also worked as a guide at the New Almaden Mining Museum.

Delgado studied history at San Jose State University and at San Francisco State University, where he earned his BA in 1981. While at San Francisco State, he worked with the United States National Park Service (NPS). His interest in maritime archaeology increased when he saw the wreck of the ship Niantic, which had been unearthed by construction in 1978. He served as Park Historian with the cultural resources management team at the Golden Gate National Recreation Area from 1979 to 1986. There he worked on documenting and preserving historic and archaeological sites, particularly ships and buildings along the buried waterfront of Gold Rush San Francisco.

From 1984 to 1985 Delgado studied at East Carolina University, where he earned an MA in Maritime History and Underwater Research. During this time, he also taught US history and surveyed Cape Hatteras National Seashore’s beaches for shipwrecks. Next, he joined an NPS team as Project Historian working on the wreck of the ship USS Monitor.

From 1986 to 1991 Delgado served as the Maritime Historian for the NPS and the head of the Maritime Initiative, the US government’s maritime preservation program in Washington, D.C. His work for the Maritime Initiative involved visiting and inventorying every known historic maritime resource, including lighthouses, shipwrecks, shipyards, and floating ships, and developing standards for their preservation and restoration. During his time with the NPS, he also surveyed and explored the wrecks of the USS Arizona and USS Utah at Pearl Harbour, the sunken fleet of atomic bombed warships at Bikini Atoll, and many other shipwrecks.

In 1991 Delgado was appointed Executive Director of the Vancouver Maritime Museum (VMM) in Vancouver, British Columbia. During his time at the VMM, the Museum organized a reenactment of the RCMP schooner St. Roch’s voyage through the Northwest Passage and circumnavigation of North America. Delgado also worked on the restoration of the Ben Franklin, a historic oceanographic research submersible.

In 2006, Delgado received his PhD in Archaeology from Simon Fraser University. His dissertation was entitled "Gold Rush Entrepôt: The Maritime Archaeology of the Rise of the Port of San Francisco." That year, he left the VMM to join the Institute of Nautical Archaeology (INA), and was elected President and Chief Executive Officer of the INA in 2008. Delgado’s work for the INA involved public outreach, media relations, fundraising, membership, and project development. In October 2010, he left the INA to join the United States National Oceanic and Atmospheric Administration as its Director of Maritime Heritage.

Delgado has written numerous articles and over thirty books, including “To California by Sea: A Maritime History of the California Gold Rush” (1990), “Ghost Fleet: The Sunken Ships of Bikini Atoll” (1996), “Adventures of a Sea Hunter: In Search of Famous Shipwrecks” (2004), “Waterfront: The Illustrated Maritime History of Greater Vancouver” (2005), “Khubilai Khan's Lost Fleet: History's Greatest Naval Disaster" (2009), and “Silent Killers: Submarines and Underwater Warfare” (2011). He served as editor for the book “Encyclopedia of Underwater and Maritime Archaeology” (1997).

Throughout his career, Delgado has led and participated in shipwreck expeditions around the world. These include explorations and dives of RMS Titanic, Carpathia, Mary Celeste, and Maud. He has also given many lectures and presentations regarding maritime archaeology.

Delgado and his first wife Mary had two children, John and Beth. As of 2010, he lived with his wife Ann in Washington, DC.

The records were in the custody of James Delgado until their acquisition by Simon Fraser University Library, Special Collections and Rare Books. Records were transferred in three accessions, MsC 123 (2010), MsC 123a (2010), and MsC 123b (2015).

Series and sub-series have been created by the Archivist according to format (such as video recordings, images, audio recordings, and electronic records) or activity (such as project, expedition, and writing records). Within series and sub-series, all files have been arranged chronologically following the creator’s original order, except where otherwise noted. Square brackets have been used in the file list to indicate titles and dates supplied by the Archivist.

For preservation reasons, photographs, audio cassettes, and videocassettes contained within files of textual records have been removed from their original files. See individual file notes for the physical locations of these materials.

All materials are in English except for one article in Norwegian.

For records in accession MsC 123b, access to records created after 1995 require the written permission of James Delgado until the year 2041.

A finding aid for the first accession (MsC 123) is available in the PDF above. File descriptions for accruals MsC 123a and MsC 123b are available in AtoM.