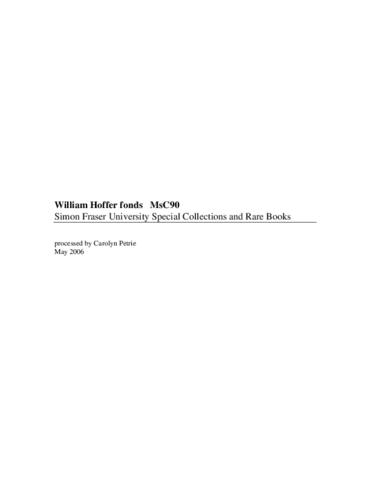 1.4 m of textual records and other material

William (Bill) Hoffer was born on May 29th, 1944 in Winnipeg, Manitoba. He earned a Bachelor of Arts degree from the University of Saskatchewan, and subsequently enrolled in the Political Science, Sociology and Anthropology department at Simon Fraser University. Hoffer was discharged from SFU for his participation in student rebellions, prior to receiving his Master of Arts degree. He began his bookselling career in 1969 with the opening of Falstaff Books, a used bookstore, in Vancouver. He later moved his store to 58 & 60 Powell Street, Vancouver, where he worked until his retirement.

Hoffer was acknowledged as an authority on Canadian literature in the antiquarian book trade. He published several special edition books, including works by W.P. Kinsella, Susan Musgrave, Robert Bringhurst, Elizabeth Smart, John Metcalf, and Ernest Hemingway. During his career, Hoffer was engaged in several literary feuds, and was a strong critic of government subsidization of the arts. He was particularly disdainful of Canada Council, and wrote several critiques to this effect.

In 1991, Hoffer closed his bookstore and moved to Russia, where he married and worked in the book trade. He remained in Russia until diagnosed with lung cancer in August of 1998, when he returned to BC for treatment from his father. Hoffer died on September 28th 1998, at the age of 53, in Victoria, BC.

Records were purchased by Stephen Lunsford, likely from Hoffer`s estate, and in turn sold to Simon Fraser University Special Collections and Rare Books in March 2006 and Winter 2008.