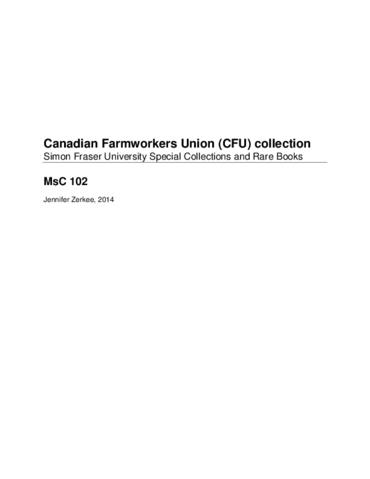 On February 26, 1979, after a series of casual meetings, Raj Chouhan, Harinder Mahil, and Charan Gill formed the Farm Workers’ Organizing Committee (FWOC) in the Fraser Valley of British Columbia. They were joined at this first official meeting by Sarwan Sidhu, Pritam Singh, Amarit Pal Mann, and Gurnam Sahota. Sarwan Boal and Judy Cavanagh soon joined the FWOC as organizers. A series of public meetings followed to spread awareness of the new group, address farmworkers’ concerns, and advocate for their rights. In the spring of 1980, at a founding convention, members of the FWOC formally established the Canadian Farmworkers Union (CFU). Chouhan was president, Jawala Singh Grewal was vice-president, Gill was secretary, and Boal was treasurer. Cavanagh was a chief organizer. The motto of the CFU was “Zindabad!” (“Long live!” in Urdu). Areas of concern and action for this new union included farmworkers’ pay, housing, working conditions, and work-related legislation. The CFU advocated for childcare for farmworkers and raised awareness of the racism the predominantly Indo-Canadian workers often faced, and also participated in numerous rights-related events and causes in solidarity with other organizations. The CFU was assisted financially by the Canadian Labour Congress (CLC) from founding until 1991.

In 1979 the FWOC began publishing The Farmworker, a Punjabi/English newspaper with the purpose of educating workers about their rights on the job and their right to organize. The CFU continued publishing this paper through the mid-1990s.

In the early 1980s the CFU focused on recruiting members and gaining certification at some farms, and also picketed and fought in court to defend farmworkers’ right to unionize and to protect workers from mistreatment by farm owners. In November of 1980, the collective agreement signed by the CFU and Bell Farms was the first ever signed by a union representing farmworkers in Canada. The union was also particularly vocal about the exclusion of farmworkers from various legislation protecting other workers’ rights and safety. In 1983, farmworkers became eligible for Workers’ Compensation Board benefits, but were still mainly exempt from health and safety regulations.

In its early years, the CFU tried to organize farmworkers outside the Fraser Valley and Lower Mainland, reaching out to workers in the BC Okanagan and Ontario. It did not succeed in the Okanagan, due to conflict between CFU executives and local organizers, and in Ontario its success lasted only a few years.

In addition to its unionization and advocacy work, the CFU responded to its membership’s needs with relevant educational programming. In 1982 the union began running “ESL Crusade” classes, developed specifically for Punjabi-speaking farmworkers and including both everyday and farmwork-specific English lessons. The “preventable homicide” of worker Jarnail Singh Deol by pesticide exposure led to the establishment of the Deol Agricultural Education and Research Society (the Deol Society) in 1983, as an internal branch of CFU created for the purpose of applying separately from the union for funding grants. The Deol Society’s main concern was education of farmworkers on the health risks and safe handling of pesticides, and it also ran ESL programs. In many projects, jurisdiction was shared by the Deol Society and the CFU.

The CFU researched a wide variety of subjects related to farmworkers and workers in general, in order to educate its members and spread awareness of many issues, from global struggles for workers’ and women’s rights to immigration and multiculturalism in Canada. CFU executives and members participated in union, labour, and activist groups and committees, and were vocal in numerous letter-writing, fundraising, and awareness campaigns. The union also participated in rallies and protests on many subjects.

By the mid-1980s the CFU was nearly bankrupt due to the ongoing difficulty of collecting dues from underpaid seasonal workers. The union briefly considered merging with other similar unions but, convinced of the unique needs of its membership, it was determined to retain its own name.

In the 1990s, the provincial New Democratic Party government extended health and safety legislation to farmworkers, solving one of the CFU’s main areas of concern. The Progressive Intercultural Community Services Society (PICS, formerly Progressive Indo-Canadian Community Services Society) and its founder, Charan Gill, took over management of the union and its work. The CFU still exists in name, but is essentially inactive.

The records in the first accession were maintained by Charan Gill until the time of their donation to Simon Fraser University (SFU) in 2006. An inventory of the records was created by students under the direction of SFU professor Hari Sharma prior to their donation to SFU. Two further boxes of material were donated by Raj Chouhan in 2010, and additional material was contributed by Craig Berggold in 2012 on behalf of Charan Gill. These first three accessions were processed as one unit (MsC 102).

A small number of file titles in the first accession contained evidence of an original numbering system (e.g. “Internal S-4 AD”), but there were too few of these to inform a recreation of the original filing system.

An inventory done of the first three accessions by students of SFU Professor Hari Sharma before donation did not impose any organization. Some materials were numbered in pen, generally in the upper right corner, during the inventory process, and identifying notes including dates or subject clarification were added to some materials in pencil.

Photographs have been numbered consecutively in the format “102.1;” the photographs contained in each file are noted in the file or item description. Craig Berggold assisted the archivist with identifying many of the photographs.

Consult staff for access to oversize or electronic records.

Most of the records are in English, a number are in Punjabi, and some are in French and other languages.

Collection is available for research in this database: https://digital.lib.sfu.ca/cfu-2-collection/canadian-farmworkers-union-collection

Access to some files is restricted for privacy reasons. See file descriptions for restrictions. Consult staff for more information.

Reproduction of material is subject to approval by Special Collections staff and any copyright holders. Copyright in many of the photographs in the collection is held by Craig Berggold and his permission is required for their use or reproduction; not all of Berggold’s photographs are identified as such, though some are identified on The Canadian Farmworkers Union Project website.

File and item level descriptions are available. Additional descriptive and contextual information for digitized items has been provided by Craig Berggold and is available on the website.