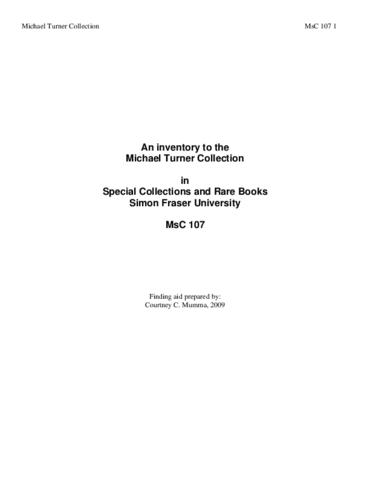 2.05 m of textual records and other material

Michael Turner (born 1962 in Vancouver, British Columbia) is a writer of poetry, prose and opera librettos; he is also a musician and was an influential literary impresario in the 1990s. Turner often varies his style and employs a rich, multi-format and intertextual approaches in his works, such as American Whiskey Bar (1997), and The Pornographer's Poem (1999). His work has been adapted to radio, stage, television and feature film, and translated into French, Russian, and Korean. He won the Genie Award in 1996 for Music/Original Song, the 2000 Ethel Wilson Fiction Prize and was also a finalist for the 1992 Dorothy Livesay Poetry Prize. Turner collaborated with artist Stan Douglas on two experimental-video screenplays, titled Journey Into Fear (Istanbul Biennial, 2001) and Suspiria (Documenta XI, 2002) and on a screenplay with filmmaker Bruce LaBruce, titled Untitled Von Gloeden Project, based on the life and work of photographer Wilhelm Von Gloeden. He was commissioned to write a libretto for the Modern Baroque Opera Company, based on Wilhelm Busch's Max & Moritz. In the late 1980s, he played in a band called Hard Rock Miners, and in the 1990s was an influential literary impresario, founder of the Reading Railroad reading series at Vancouvers Railway Club, and also the Malcom Lowry Room, a multi-media arts nightclub in North Burnaby, B.C. In 1996, director Bruce McDonald directed a film based on Hard Core Logo; he also directed a live telecast dramatizing Turner's novel American Whiskey Bar in 1998, which Citytv produced and aired. In 2005, a film based on The Pornographer's Poem was announced. Turner lives in Vancouver, writes art essays and edits Advance Editions, a literary/visual art imprint he founded with Arsenal Pulp Press in 1998. A new book will be published in Sept. 2009.