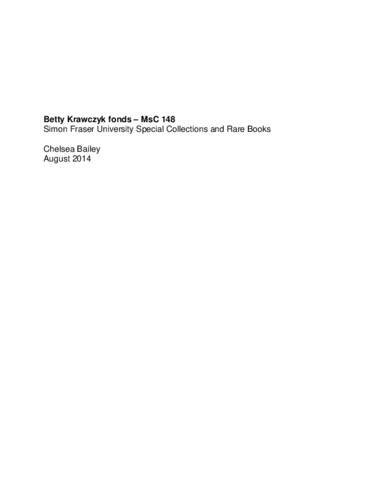 3.6 meters of textual records and other material

Betty Shiver Krawczyk, known as Betty Krawczyk, was born in Salinas, California on August 4, 1928, but raised in Louisiana. Krawczyk, now based in British Columbia, is an environmental activist and the author of five books.

Krawczyk grew up in East Baton Rouge Parish, Louisiana, before moving to Phoenix, Arizona. She would later move to California, Baton Rouge, and Virginia due to family commitments. Krawczyk immigrated to Canada in 1966 with her husband and six children in opposition to the political policies of the U.S. Married four times, she has eight children – Joseph Albert, Michael Ray, Andrew Russell, Susan Amana, Margaret Elizabeth, Rose Mary, Barbara Ellen and Marian Theresa. She is also a grandmother and great-grandmother. After raising her children, Betty moved to Clayoquot Sound, British Columbia.

Due to international media coverage, Krawczyk is known throughout the world for her environmental activism and imprisonment. She has been involved in four major environmental campaigns: the blockading of Clayoquot Sound, for which she was arrested on July 6, 1993, convicted of Criminal Contempt of Court on September 10, 1993, sentenced to 45 days in addition to time served, and released on November 12, 1993; the Elaho Valley Campaign near Whistler, for which she was arrested three times (September 30, 1999, May 15, 2000, September 6, 2000), convicted, and served a total of ten months time at the Burnaby Correctional Centre for Women (released in March 2000); the Campaign against Gordon Campbell’s Working Forest Legislation, for which she was arrested on February 14, 2003 for blocking a portion of the road in front of the B.C. legislative buildings and served two weeks in jail; and the Walbran Valley Campaign, for which she was twice arrested for blockading the valley (May and July 2003), convicted of Criminal Contempt of Court, and sentenced to ten and a half months in the Burnaby Correctional Centre for Women, but released one month early. Krawczyk was a key participant in the Eagle Ridge Bluffs blockade in West Vancouver, which began on April 18, 2006, and was arrested three times as a result of her participation (May 25, 2006, May 31, 2006 and June 27, 2006), spending three weeks in prison between July 7 and August 2, 2006 prior to her conviction on February 8, 2007 and sentencing to ten months in the Alouette Correctional Centre for Women in Maple Ridge on March 5, 2007. Independently performing research for her legal battles, Krawczyk has mostly represented herself in court, with intermittent assistance from lawyer Cameron Ward. As of 2014, Krawczyk has spent just over three years in prison.

In addition to her environmental activities, she has expressed an interest in socialism, feminism and politics, and a dislike for racism and the state. In 2001, Krawczyk ran for the Green Party in the British Columbia provincial election, coming in third in her riding. In 2008, she ran for the Work Less Party in the Canadian federal election, and for Mayor of Vancouver.

Krawczyk started writing for women’s magazines at age 30, and has been writing ever since. She is active in British Columbia’s publishing industry. She has a book publishing company titled Schiver Rhodes Publishing, based in Cumberland, British Columbia, and has hosted a blog titled Betty’s Early Edition since 2006. Her published books include:

Krawczyk, Betty Shriver. (2002). Lock me up or let me go: The protests, arrest, and trial of an environmental activist. Vancouver: Press Gang Publishers.

Krawczyk, Betty Shriver. (2011). This dangerous place: My journey between the passions of the living and the dead. Cumberland, BC: Schiver Rhodes Publishing.

The fonds was created and accumulated by Betty Krawczyk and remained in her possession until donation to Simon Fraser University Special Collections and Rare Books in 2013 and 2014.

The fonds was acquired by Simon Fraser University Special Collections and Rare Books from Betty Krawczyk in two accessions in 2013 (MsC 148) and 2014 (MsC 148b).

Original order was maintained when possible. The archivist imposed order onto some series due to their complete lack of order upon acquisition. A note specific to the arrangement of each series is provided due to this consideration.

The fonds consists of two accruals.

Some of the records are extremely mouldy and have been removed from the fonds.