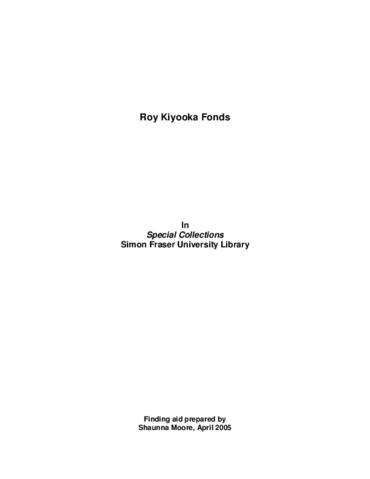 5.9 m of textual records and other material

Roy Kenzie Kiyooka (January 18, 1926 January 8, 1994) was an influential Canadian photographer, poet and artist of national and international acclaim. A Nisei or second generation Japanese Canadian, Kiyooka was born in Moose Jaw, Saskatchewan and raised in Calgary, Alberta. In 1942, following the bombing of Pearl Harbor, he and his family were uprooted and interned. Kiyooka studied at the Southern Alberta Institute of Technology and Art, and first made a name for himself as painter. He taught in Halifax at the Nova Scotia College of Art and Design, and in 1973 he was hired as an instructor of painting at the University of British Columbia Faculty of Fine Arts. During this period, his work turned increasingly away from painting to other forms of visual and performing arts, and to writing. His book, Pear Tree Pomes, was nominated for the 1987 Governor General's Award. In 1978, he was made an Officer of the Order of Canada.