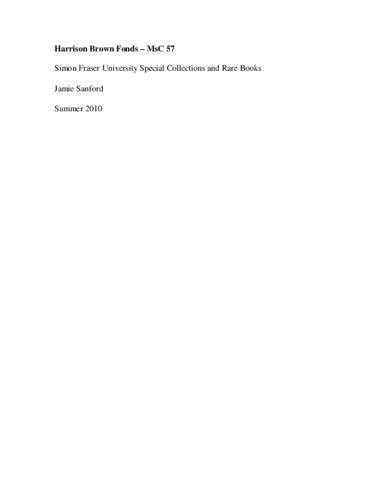 1.65 m of textual records and other material

George Harrison Brown was born in Surrey, England, in 1893. Like many of his peers he went by his middle name and was known to all as Harrison Brown. In 1914, at the age of 21, he enlisted in the British Army and saw active service in France for the duration of the First World War. After the War he lived in London and Paris and became associated with the American Committee for the Outlawry of War. During this period he travelled extensively within Europe, working with the staff of the League of Nations and foreign ministries. The work of the Committee was wound up when the Kellogg-Briand Pact (Treaty of Paris, 1928), was enacted.

He then became a free lance journalist and writer, writing for the Evening Standard, the New Chronicle, the New Statesman, the Fortnightly Review, and numerous other publications, and also broadcasting several radio series for the BBC. He lived in Germany from 1929 to 1933, leaving several months after Adolf Hitler came to power and spent the next few years writing about the rise of fascism and made numerous lecturing tours to university campuses in the United States and Canada, under the auspices of The Institute of International Education.

In 1936-1937 he made an extensive journey through Scandinavia, the USSR, Japan, Korea, and China. In China he travelled to Sian where he interviewed the young Marshall Chang Hsueh Liang, two days before he infamously kidnapped Chiang Kai Shek and obtained from him a change in Kuomintang policy in order to unite the nation against the Japanese invasion. During this period Brown kept a detailed journal and took hundreds of photographs which chronicled his travels. This would later take the form of an unpublished manuscript.

In 1937 Brown moved permanently to Hornby Island, British Columbia, with his common law wife Hilary Brown, an accomplished author. Here they established the Heron Rocks Campsite which later became a Co-op. In 1940 Brown ran unsuccessfully as the candidate for the C.C.F. in the Comox - Alberni riding.

Brown became a Canadian citizen and continued to write articles and short stories. He died in September 1977 at the age of the 84.

The material was collected and maintained by Brown until his death in 1977. After this period Hilary Brown preserved the materials and donated them to Simon Fraser University Library Special Collections and Rare Books in 2002.

The materials were arranged according to the original filing system of the creator and to facilitate research.

Series descriptions and file list available. Collection is available for research in this database: https://digital.lib.sfu.ca/hbc-collection/harrison-brown-collection.