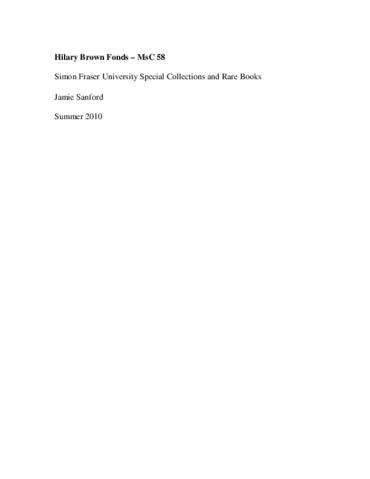 2.21 m of textual records and other material

Joan Hilary Brown (nee Newitt) was born on March 21, 1909 in Helensburg, Scotland. Like many of her peers she went by her middle name and was known to all as Hilary Brown. Upon completion of her school studies Brown studied French and German in Geneva and Frankfurt with the aim of becoming an interpreter. During her time at the University of Frankfurt (1929 -1932) Hilary met Harrison Brown, a journalist, who would become her lifelong partner.

In 1937 Brown’s book "Women Must Choose", a study of women in democratic, socialist, and fascist states was published. Brown undertook several lectures tours throughout the US to promote the book. She received a contract for a second book, "Half of Humanity", which was never published due to the publisher’s demands that the manuscript be diluted to make it more appealing for a female audience. The same year she moved permanently to Hornby Island, British Columbia, with Harrison Brown. Throughout the 1950’s Brown was a regular contributor to CBC Radio, producing broadcasts on an array of subjects.

In 1973, the governing New Democratic Party passed legislation to create an Island’s Trust to oversee the island’s located in the Strait of Georgia and Howe Sound. The following year Brown was appointed as the inaugural Director and Chair of the Islands Trust for a two year period.

The death of Harrison in 1977 did not slow Brown down. In the late 1970’s and 1980’s Brown embarked on a series of trips to China and produced an unpublished study "Tomorrow’s Ancestors" which examined the plight of the elderly. The venture was supported by the Canada Council and the National Film Board.

In 1991 Brown became one of the founders of the "Gulf Island Guardian" and in 1992 received the Governor General’s Medal in honour of the 125th anniversary of the confederation of Canada.

The material was collected and maintained by Hilary Brown until her death in 2007. Simon Fraser University Library, Special Collections and Rare Books acquired the materials in several accruals from 2007-2010.

The materials were arranged according to the original filling system of the creator and to facilitate research.