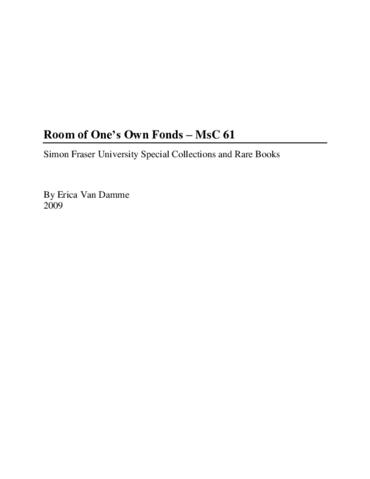 4.26 m of textual records and other material

Room of One’s Own is a quarterly literary journal produced by and for women. Based in Vancouver, Canada, the journal was founded in 1975 by Gayla Reid, Gil vanVarsveld, Laura Lippert, and Laurie Bagley who called themselves the Growing Room Collective. Room of One’s Own is published by the West Coast Feminist Literary Magazine Publishing Society, through which the entirely volunteer collective continues to publish short fiction, creative fiction, poetry, book reviews, interviews, and artwork. 1975 was also International Women’s Year which aided the Growing Room Collective in receiving grant funding to begin their publishing endeavor and incorporate as a society.

The journal’s name is based on an essay written by Virginia Wolf and delivered as a Series of lectures at two Women’s colleges at Cambridge University in 1928. In 2007, the journal was renamed Room in an attempt to rebrand the publication to indicate a more editorial tone and conversational nature.

Initially members of the Growing Room Collective were personally involved in all aspects of the production and publication of each journal. They would read manuscripts and decide on which submissions to accept based on majority rule. Contributors would be sent a letter which informed them that the accepted submission(s) would be published in one of the next four volumes. Additionally, contributors would be expected to provide an electronic copy of their manuscript, or high quality reproduction in the case of visual artists, along with a signed agreement form which indicates copyright and payment details. The Collective members would determine which manuscripts or artwork to include within a volume according to the issue’s general tone or specific theme. They would then be responsible for the overall layout and design of the volume as well as editing, typesetting and proofreading drafts.

However, the process of publication has evolved since the inception of Room of One’s Own. As the Collective and the journal itself expanded, duties became more specialized. Although most members still share submission reading, proofreading and administrative duties, for every volume, one Collective member is assigned the position of editor and it is their responsibility to choose and edit the manuscripts to be published that quarter. Additionally, contributors are not informed of acceptance until they have been selected for a specific volume.

Reproduction of the material is subject to the approval of Special Collections and Rare Books staff.