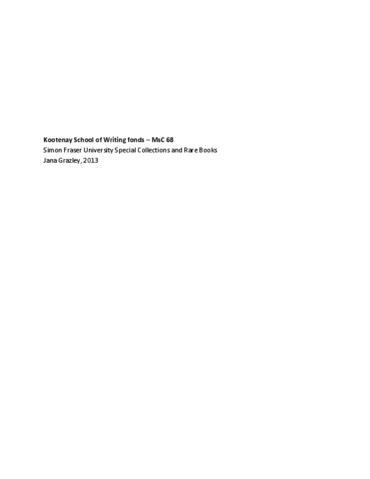 1.89 m of textual records and other material

The Kootenay School of Writing (KSW) grew out of the creative writing program at David Thompson University Centre (DTUC), Nelson, British Columbia. Established in 1979, the program ended when DTUC closed in 1984 following budget cuts by the provincial government. A collective of former DTUC instructors and students organized under the name the Kootenay School of Writing, and began to offer writing courses in Vancouver in the fall of 1984 and Nelson in the fall of 1985. Colin Browne and Fred Wah, both former DTUC writing program coordinators, were chosen to head the Vancouver and Nelson programs respectively, and the Kootenay School of Writing was incorporated as a non-profit society in September 1984.

Following the collaborative and non-hierarchical ethos of the DTUC program, the Kootenay School of Writing operated using a volunteer-based collective structure, with the role of the Board of Directors being largely symbolic; administrative decision-making was shared among collective members. Initially, the primary activities of KSW were focused around education, but readings also constituted a significant part of programming. Two colloquia organized by KSW – New Poetics (1985) and Split/Shift (1986) – brought writers from across Canada and the United States to Vancouver, and emphasized KSW’s interest in the intersections of language, politics, and class. Over time, the focus of KSW’s activities shifted from courses to events.

Through the 1990s, KSW experienced difficulty maintaining financial stability. Conflict arose amongst members as to whether the School should undertake administrative re-structuring, transitioning to a more formal organizational structure with designated roles and responsibilities. Comprehensive re-structuring was ultimately abandoned in favour of creating a part-time administrative position, which was filled by collective members on a rotating basis. The City of Vancouver withdrew its operating grant for KSW for the 1998 fiscal year, giving rise to various fundraising activities, including a benefit reading by Michael Ondaatje.

The Kootenay School of Writing continues to function as a hub for avant-garde poetry in Vancouver. In 2008 a third major conference, the Positions Colloquium, brought numerous poets from across North America to Vancouver for five days of readings, discussions, performances, etc. At the time of writing (Summer 2013), however, the future of the organization is uncertain.

The fonds was held by the Kootenay School of Writing collective until the bulk of the material was transferred to Simon Fraser University Special Collections and Rare Books in 2004. Remaining material was donated by KSW collective members in subsequent years.

The majority of the material was purchased from the Kootenay School of Writing collective by Simon Fraser University Library, Special Collections and Rare Books in 2004. Remaining material was donated by KSW collective members in subsequent years.

More information on the administrative history of KSW is available in Geoff Laurenson’s paper “The Kootenay School of Writing: History and Evolution of Administration, 1984 – 2012” (Appendix I in online finding aid).

Arranged and described by Jana Grazley in 2013.