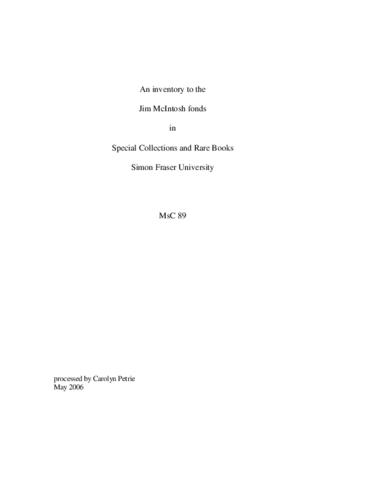 Jim Mclntosh's early career was as the Canadian representative for WB Saunders, a Philadelphia publishing house specializing in medical textbooks. His love of books inspired him to open Colophon Books in Vancouver, BC, in 1975. The store's first emphasis was on Canadian fine arts, but Mclntosh quickly branched into modern literature, selling both new and used books with a particular emphasis on Canadian titles and the American avant-garde. Mclntosh was the first bookseller in Vancouver to handle material from Black Sparrow Press of California, and he sold items from other fine presses from the Pacific North West. Colophon Books also published limited edition chap books and broadsides by Canadian poets, and one book, Alison's Fishing Birds by Roderick Haig-Brown. Mclntosh collaborated with printer and illustrator Jim Rimmer of Pie Tree Press on several of these publications. Colophon Books closed around 1995, when Mclntosh retired to Mission, BC.